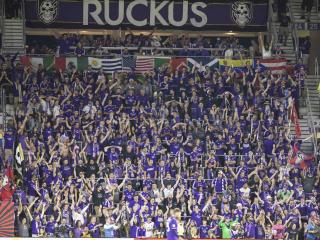 Over the years, the standard and poplarity of the MLS (Major League Soccer) has been rising and this opportunity to watch Orlando City in action gives you the chance to see for yourself!

Last season's 11th place finish in the Eastern Conference was a disappointment for The Lions however, a decent pre-season and a roster reshuffle have improved hopes for the 2019 campaign.

While some American sports seem to be focused as much on events taking place off the pitch as on it, the attention of the fans at the 'Purple Palace' AKA Orlando City Stadium is very much on the field of play.

In fact, the passion of the The Lions' supporters is more akin to the experience at a British game of soccer... sorry football.

There are five different seating locations to choose from:

This ticket option includes transportation to and from the stadium beginning with a collection from one of the following conveniently located pick-up points:

Please note that pick-ups commence up to 3 hours before kick-off and your exact collection time will be advised upon reconfirmation locally.